Your cart is empty

Made from BMW 503 Interieur

Made from BMW 503 Interior 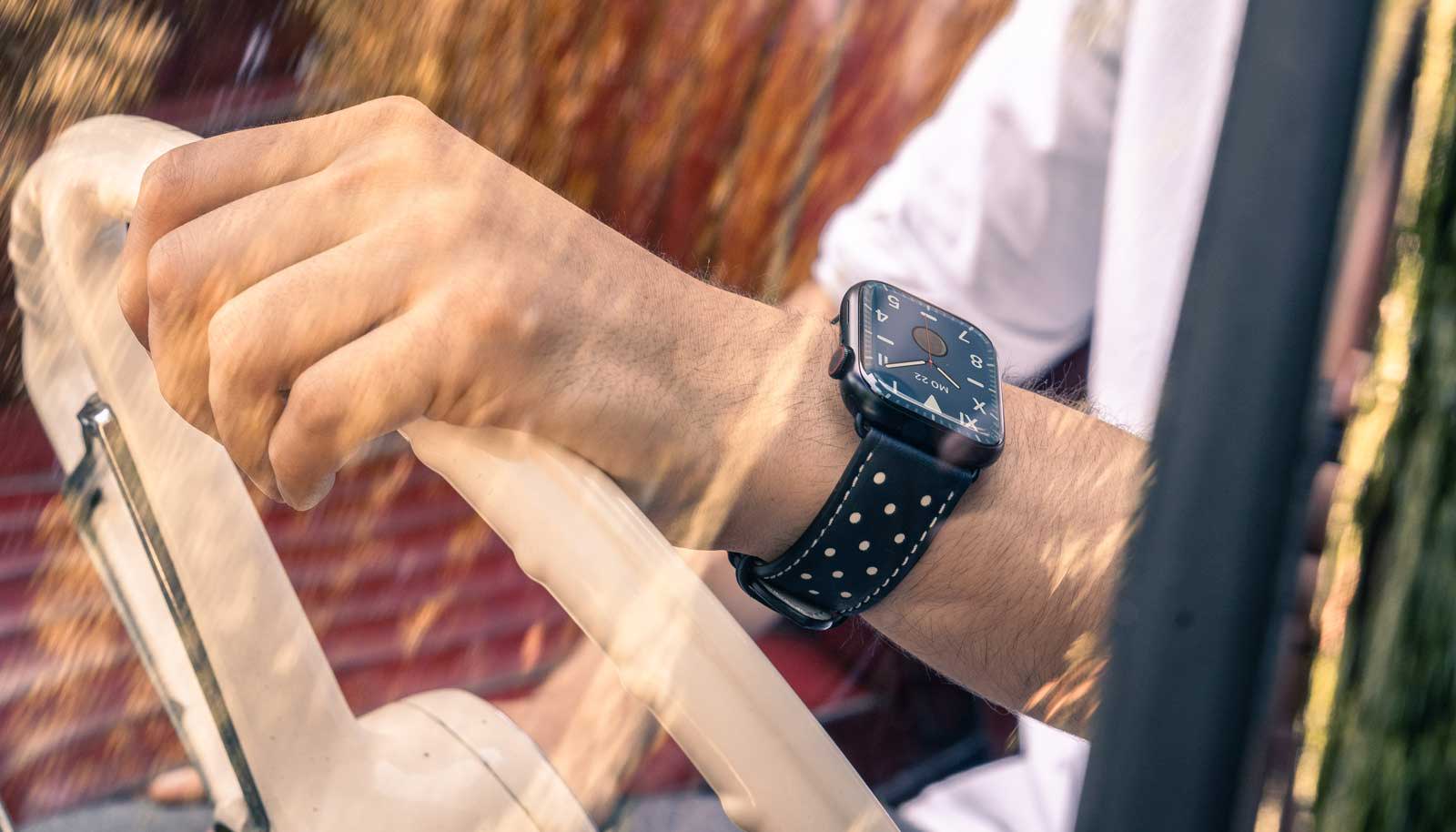 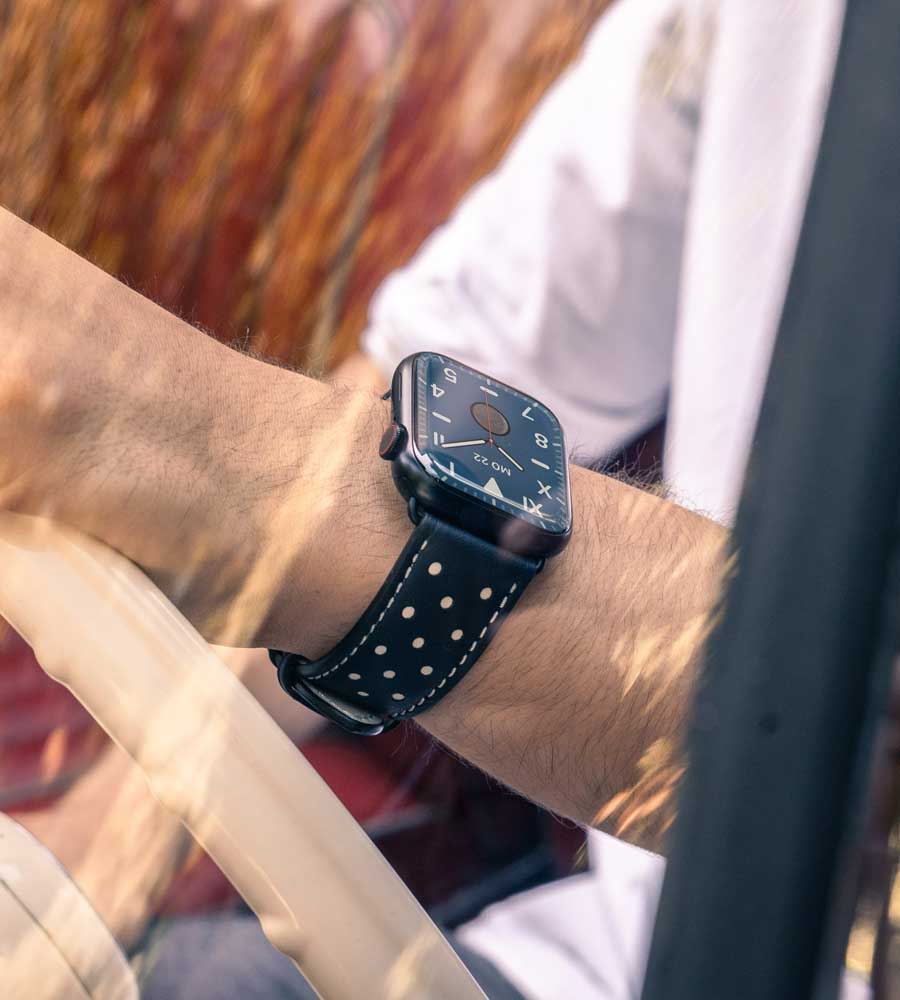 Many people drive cars. Demanding people drive BMWs. This slogan accompanied the BMW 503 when it was launched at the 37th International Motor Show (IAA) in 1955. Along with its sportier roadster version, the 507 model, the luxury car with a V8 engine was the big sensation at the IAA.

The sound and power of the world's first light-alloy V8 sparked incomparable emotions among enthusiasts, just as it does today, which is precisely why the new Special Edition Achtzylinder (german for eight-cylinder engine) is named after it.

The leather for this edition comes from the interior of a 1957 BMW 503 which yielded a total of 499 Apple Watch bands.

As with our last special edition, the watch band will also be available exclusively in our Munich store on September 10 during the usual opening hours from noon to 6 p.m.

Freedom: As defined by the Oxford Dictionary, this is “The state of being able to act without hindrance or restraint”. A state we rediscovered in the summer of 2022 after two years of deprivation and limitations.

Our individual definition of freedom is less formal than the description in said dictionary. It is difficult to put into words and therefore finds a more suitable framework in our film for the Special Edition Achtzylinder.

Anyone who has the chance to enjoy the fresh air on the shores of Lake Como with the top down and a powerful V8 under the hood will quickly realize that there is probably no better way to describe this experience than with the words of BMW's own copywriters: sheer driving pleasure.

Although the claim only came about ten years after the presentation of the 503 model, it still fits perfectly well - then and now. 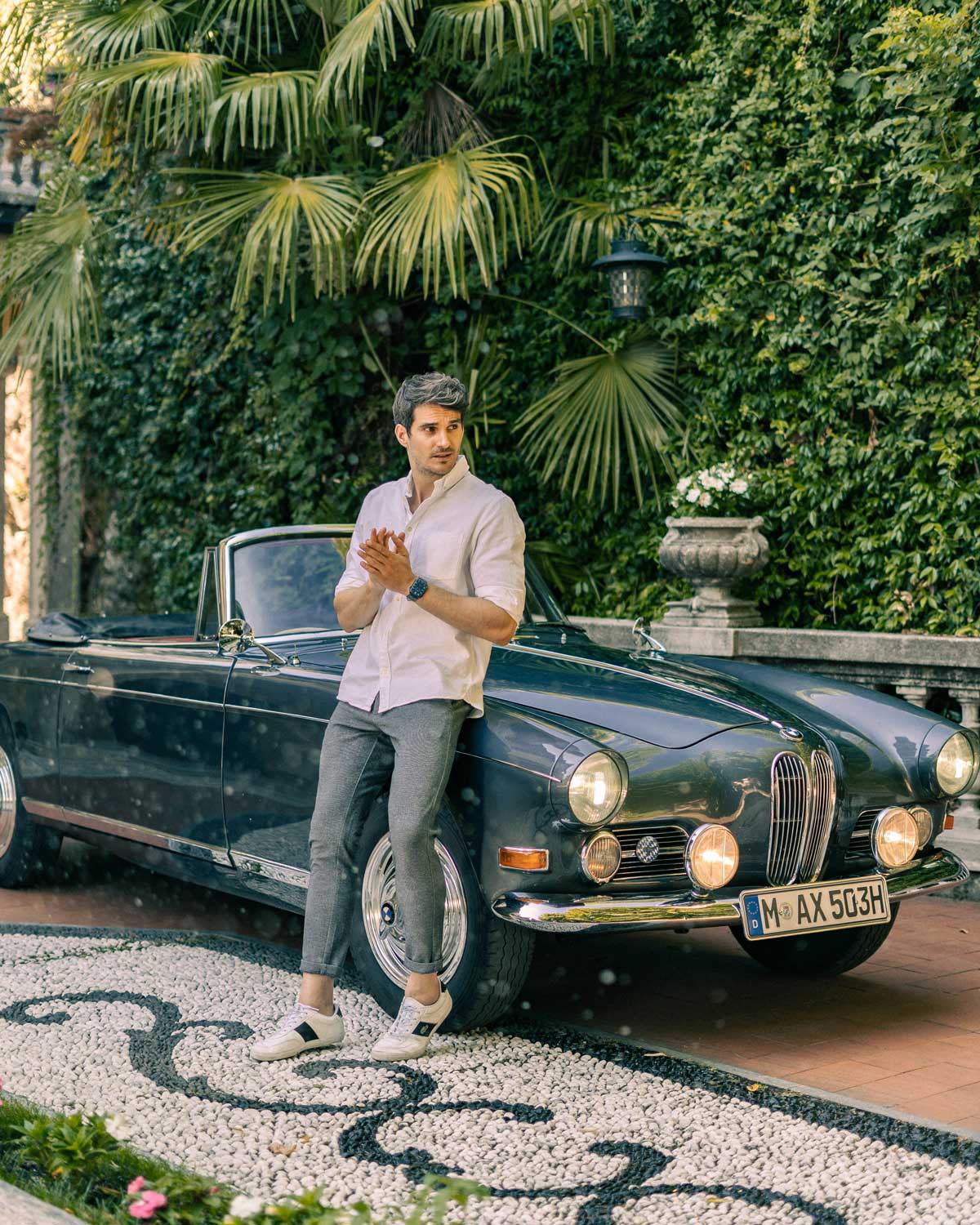 When we were allowed to hold the beautiful midnight blue interior leather of the BMW vintage car in our hands for the first time a few months ago, we already had the final band design in mind.

It had to fit BMW's sporty brand image, but shouldn't be too aggressive, after all, the noble appearance of the 503 model should also be taken into account. Above all, of course, only one color could be used as an accent to the dark blue leather: the white seams and the inner leather of the watch band, which is visible through the racing perforation, are a subtle homage to the white and blue coat of arms of the Bavarian vehicle manufacturer. 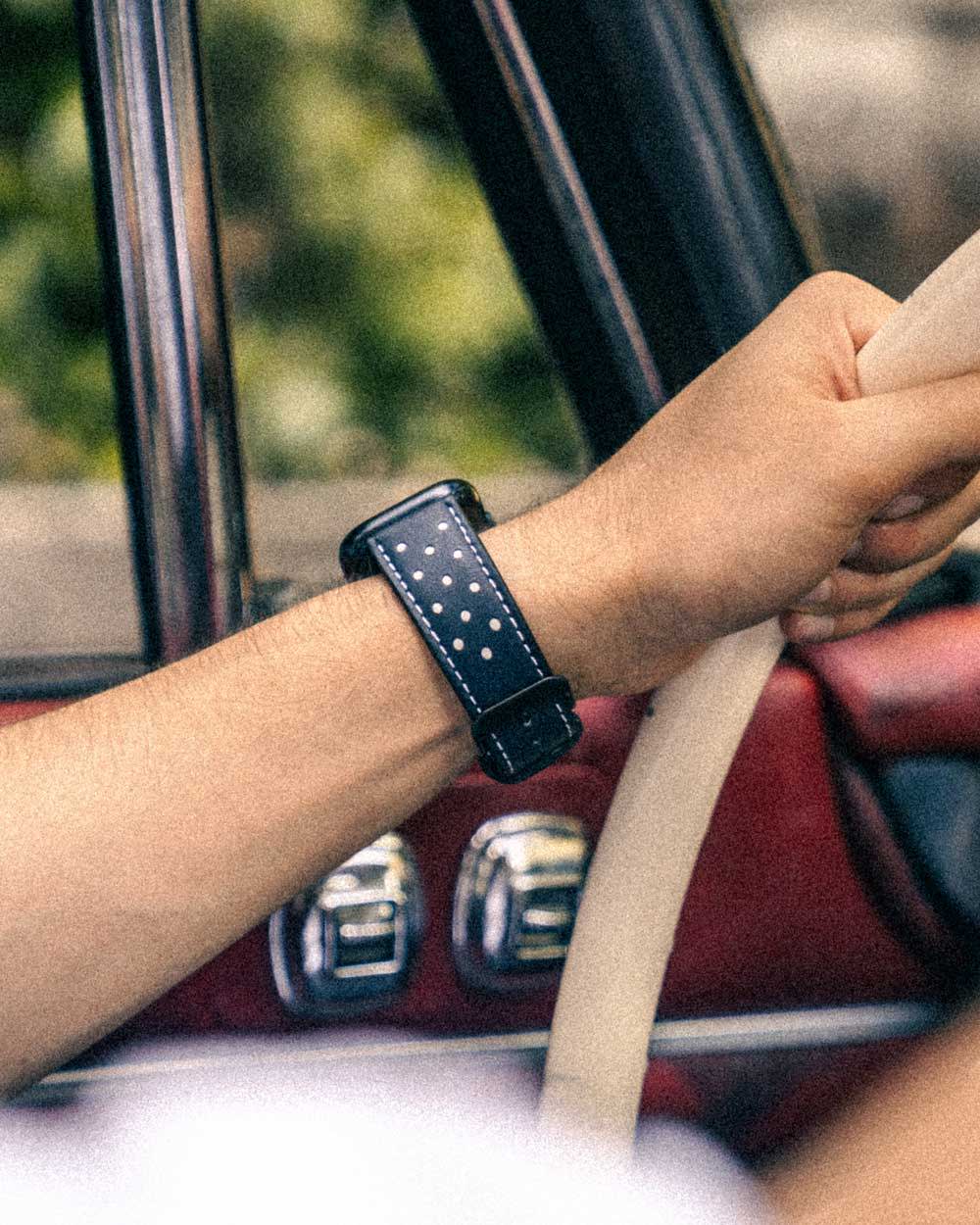 Although the car was highly praised by the international press for its incomparably harmonious aesthetics, it was not a great sales success for the Munich company. This was mainly due to the steep sales price: for the approximately 30,000 German marks that BMW charged for the vehicle, you could also get a comfortable residential property in the 1950s. In a society just recovering from the war, the target group was limited to a small, wealthy upper class such as entrepreneurial families and prominent actors.

62 years ago, in May 1960, the last 503 rolled off the assembly line. Because the car was overshadowed by its sibling model 507 for a long time and received little attention in classic car circles, only a few of the 412 cars originally produced are preserved today. 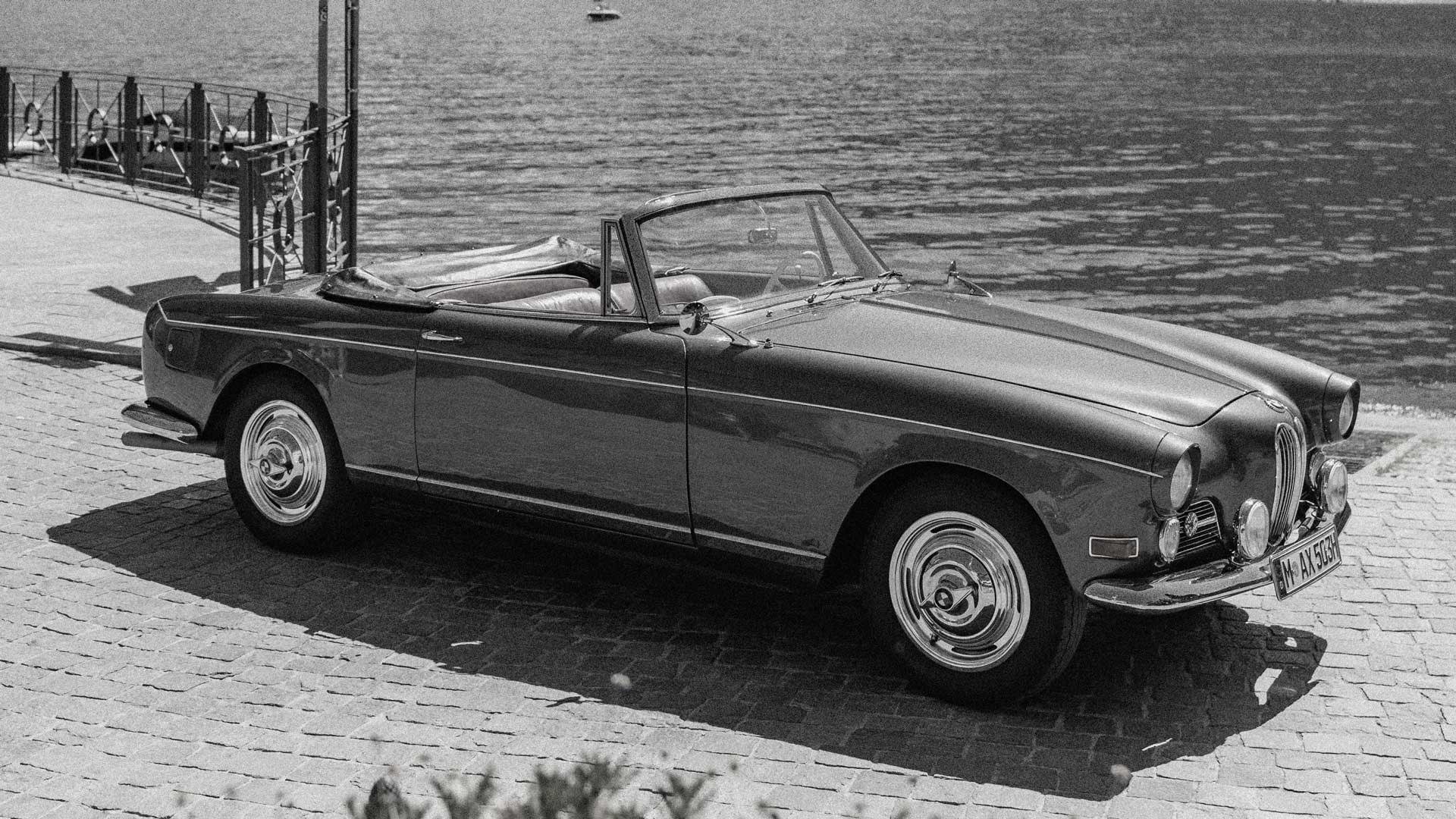 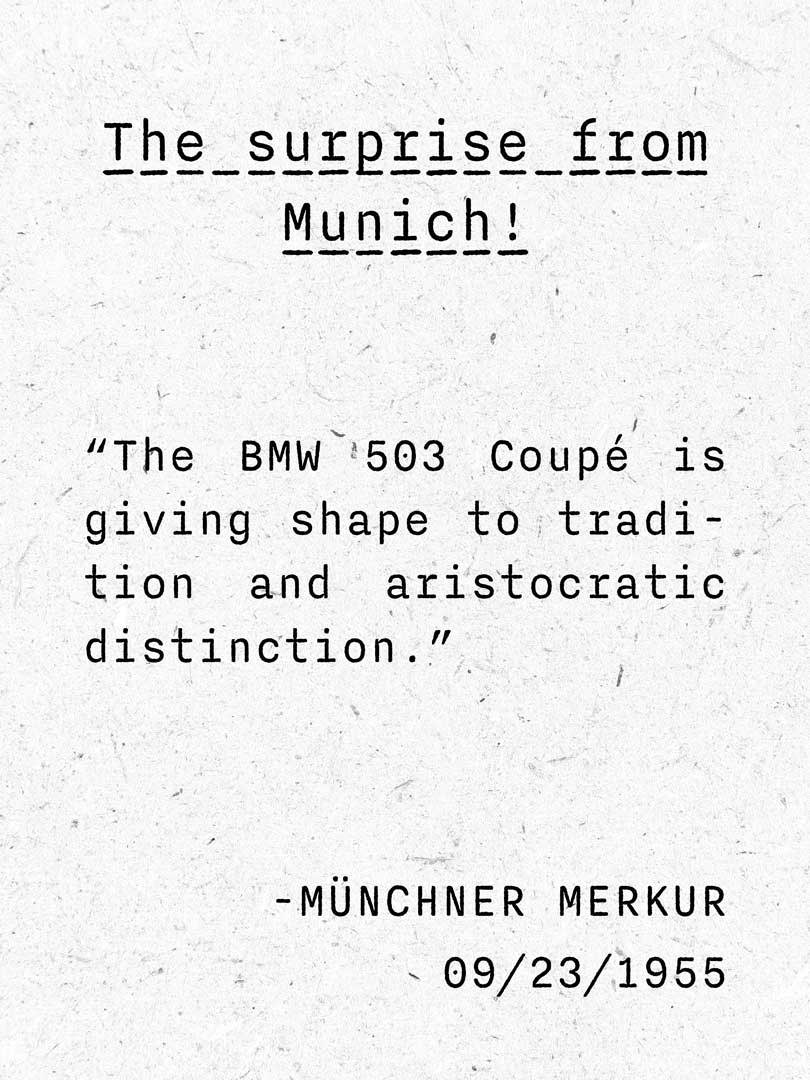 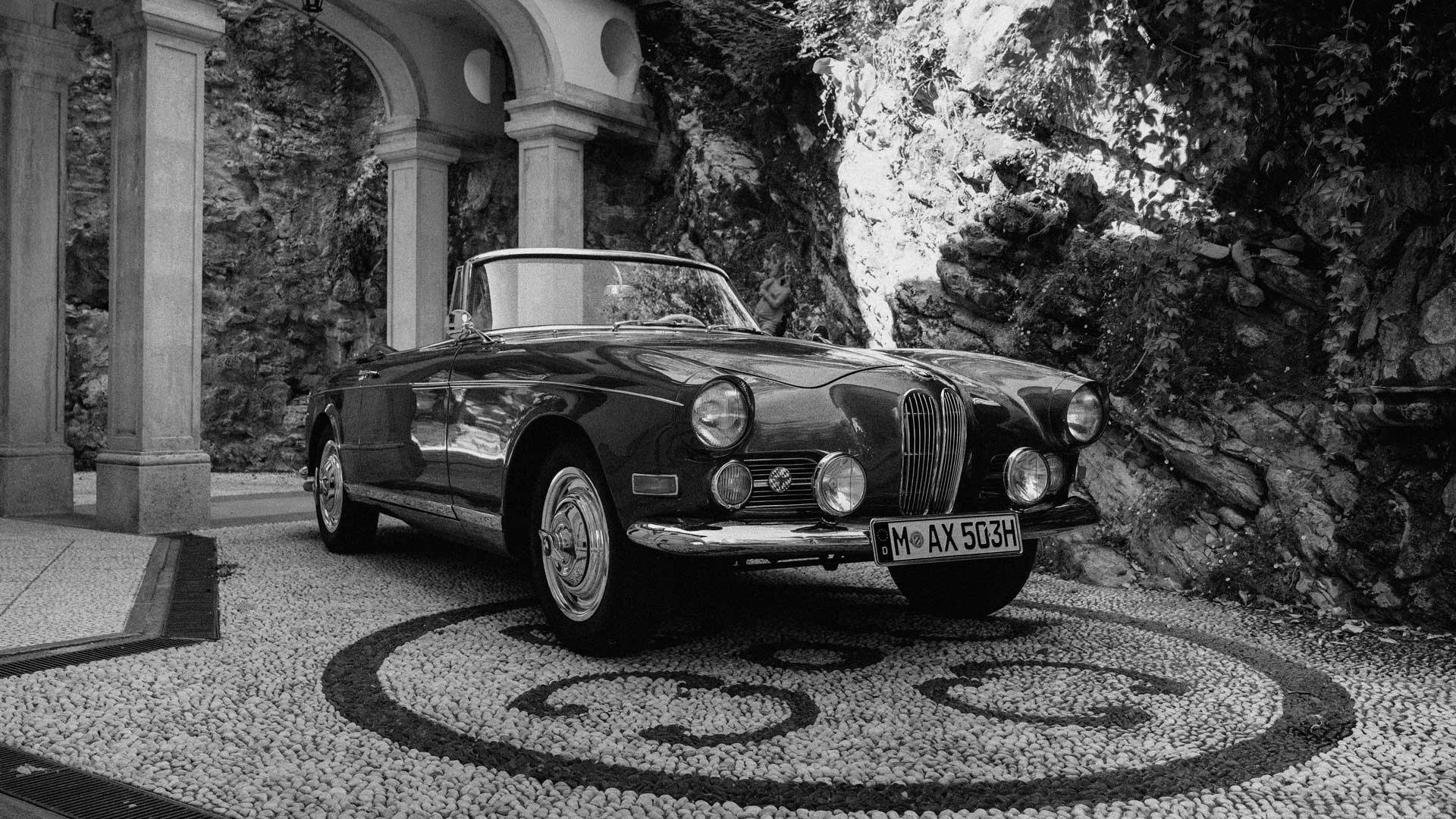 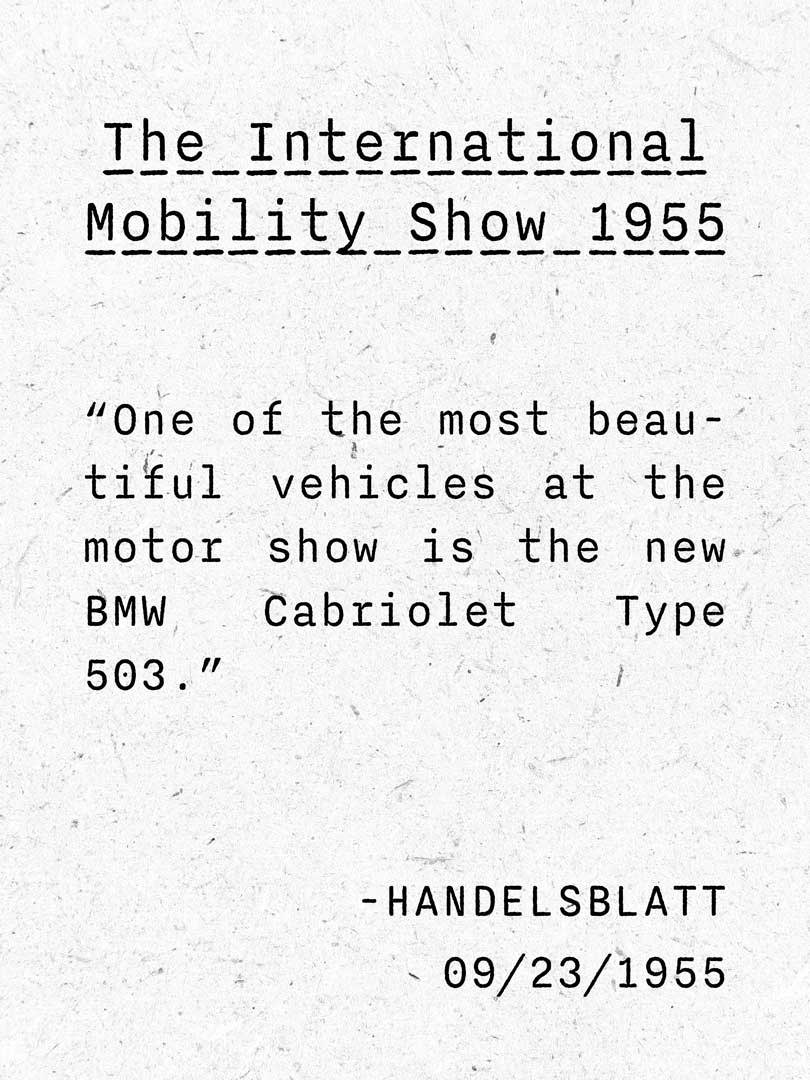 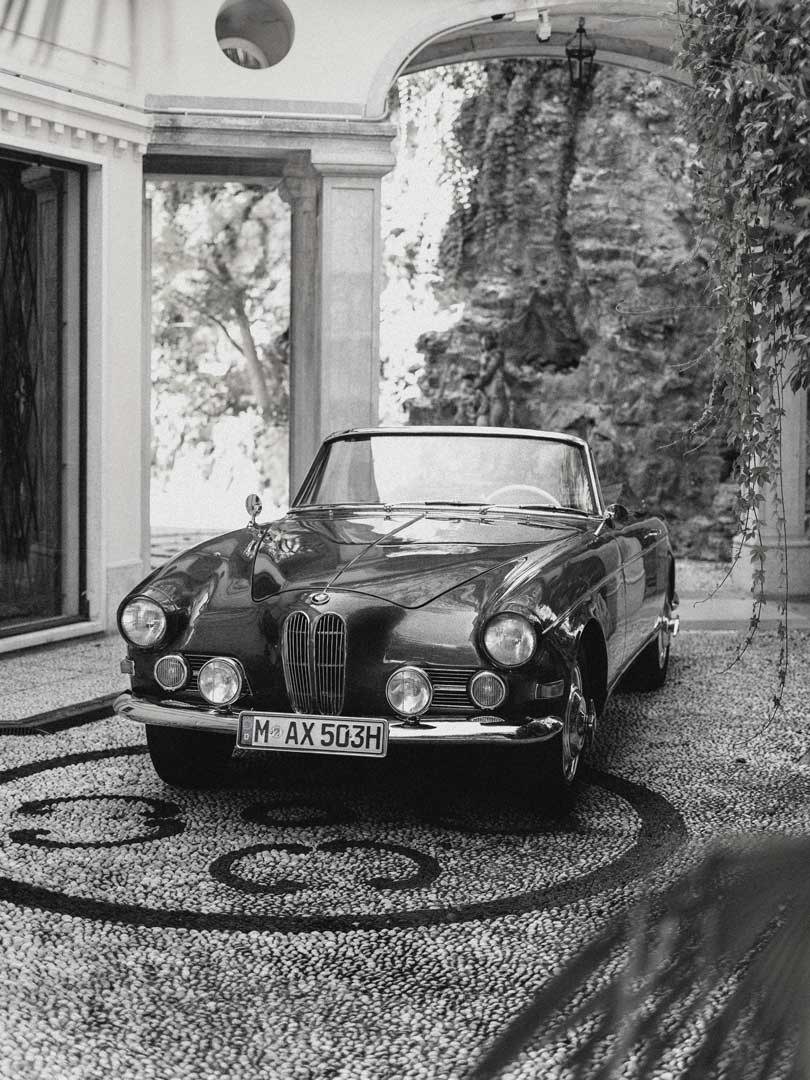 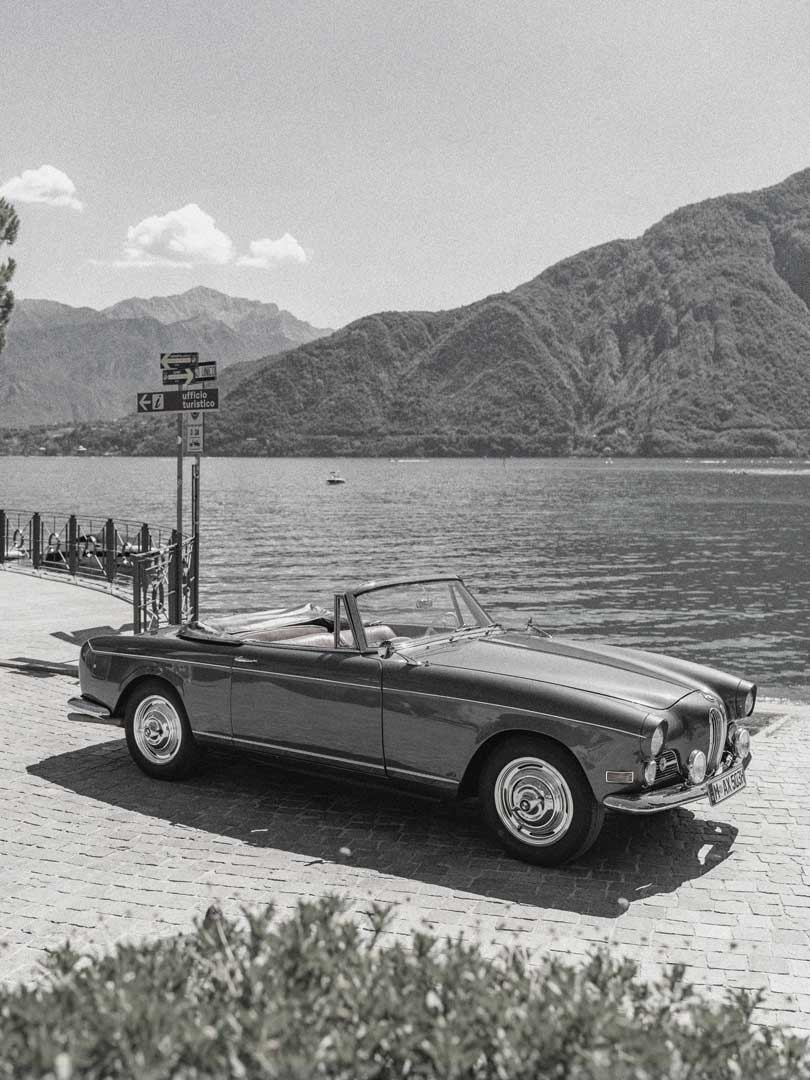 A Piece of History

The 503 model is a snapshot of German automotive history: a unique dream made of well-formed sheet metal that almost drove its manufacturer to ruin. In retrospect, its production was probably not a great decision for BMW, for which we couldn't be more grateful today. 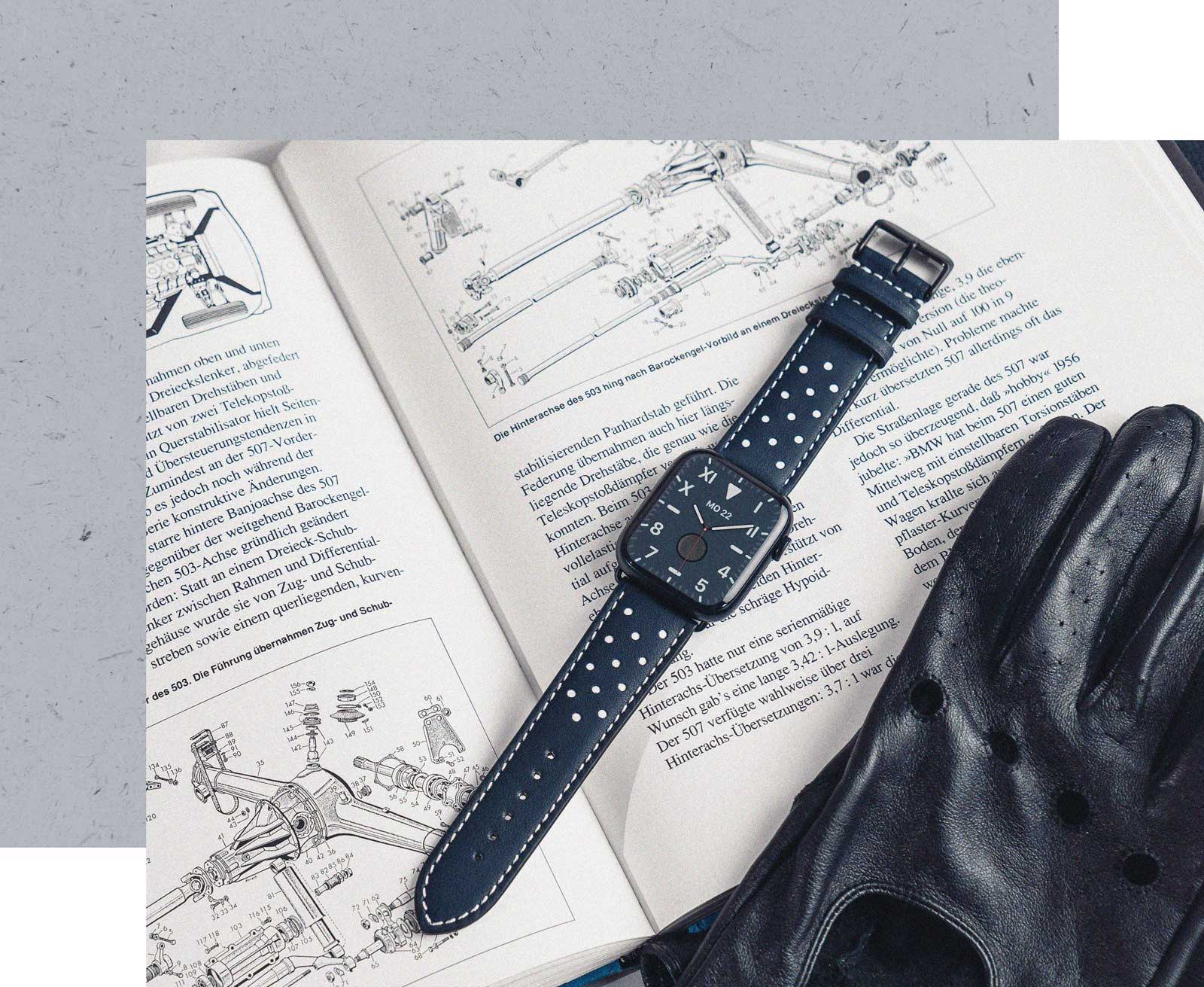 After all, you wouldn't otherwise have the opportunity to purchase one of the 499 Apple Watch bands made from the interior leather of the notorious classic car.

More about our Editions 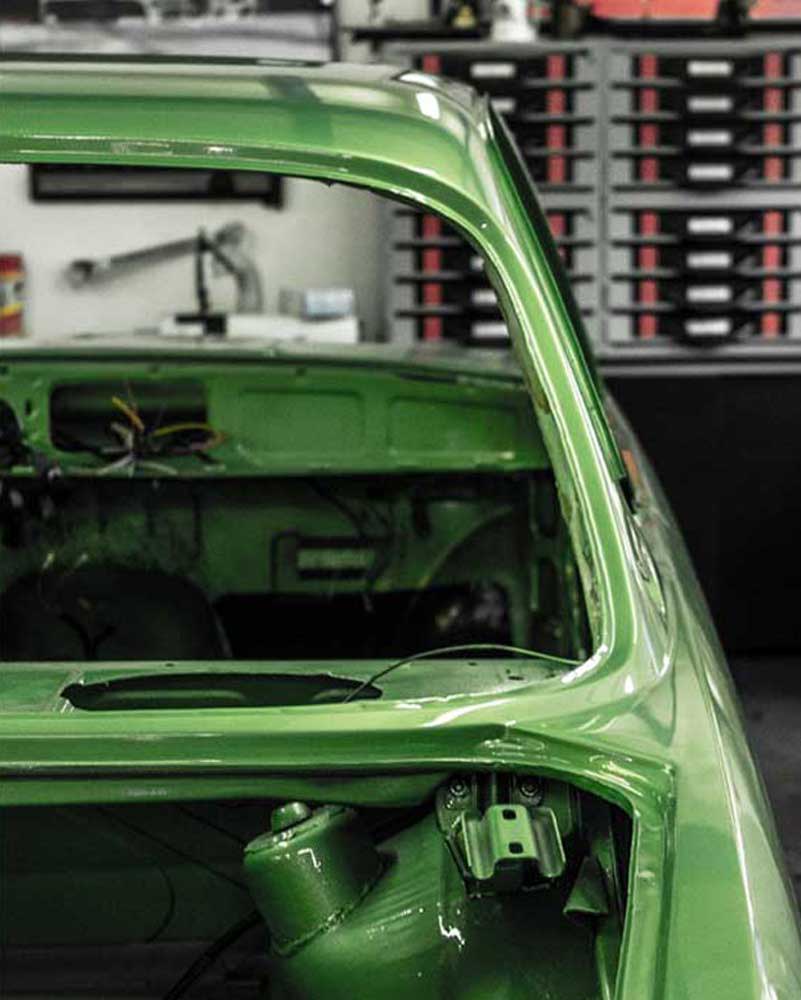 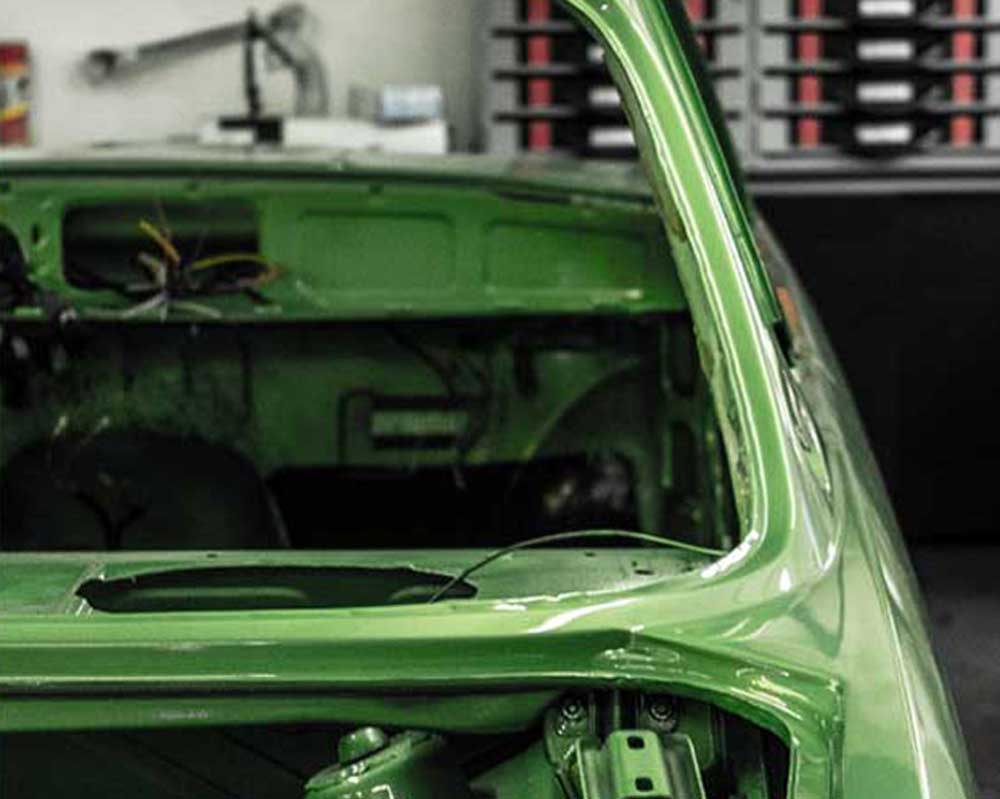 Here's how we make our Special Editions

Take a look behind the scenes and join us in leather selection for a new special edition. 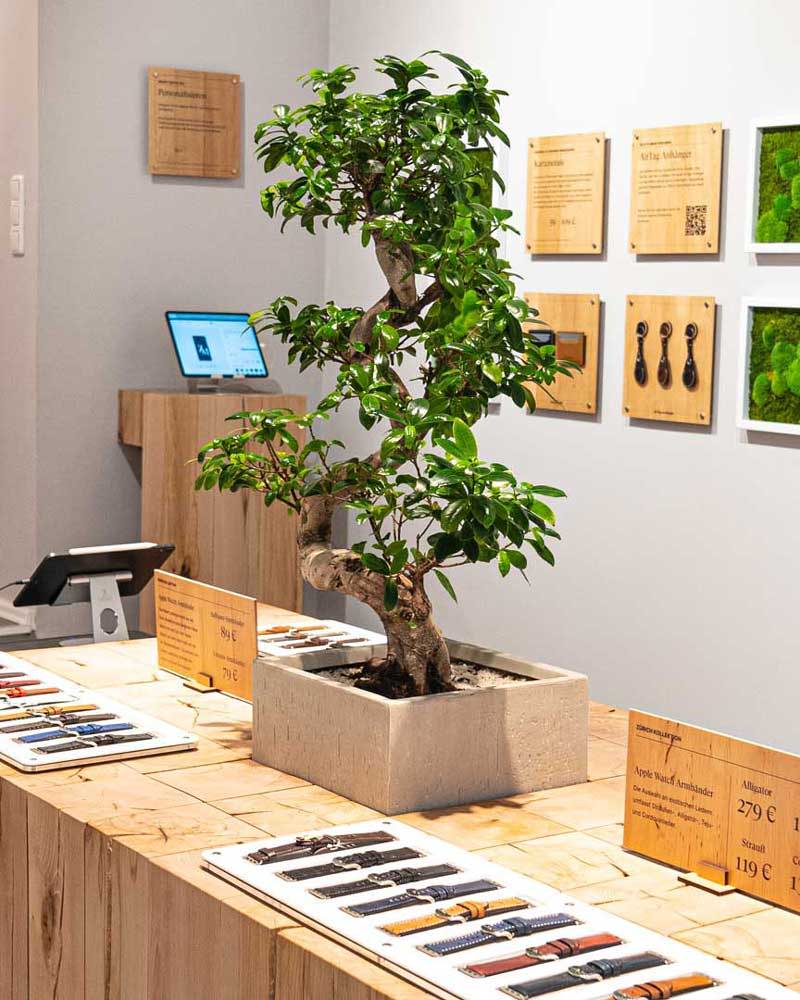 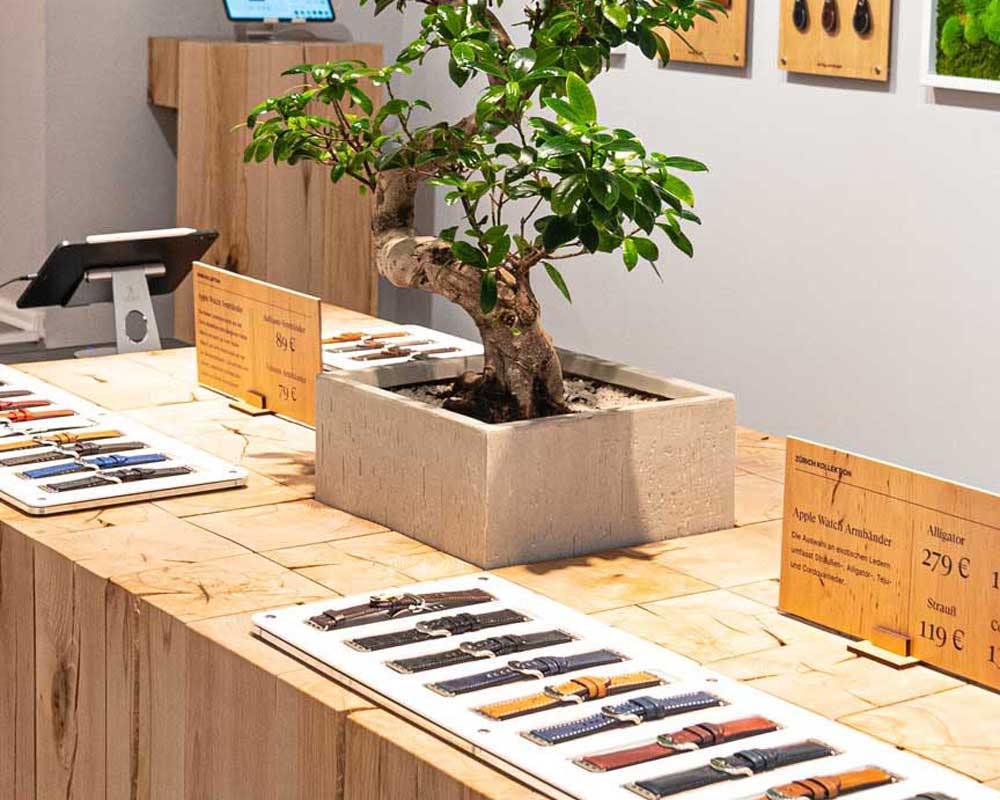 Our store in Munich

Once again, some of the limited edition bands will be available in the BandWerk store in Munich one day before the official release. 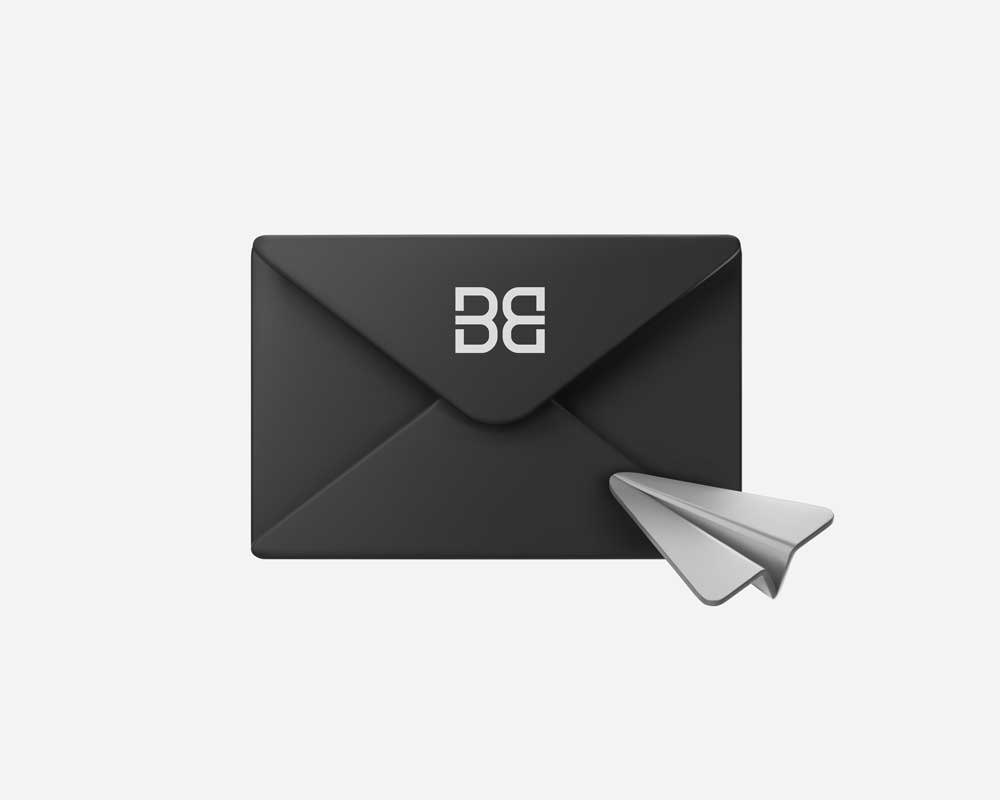 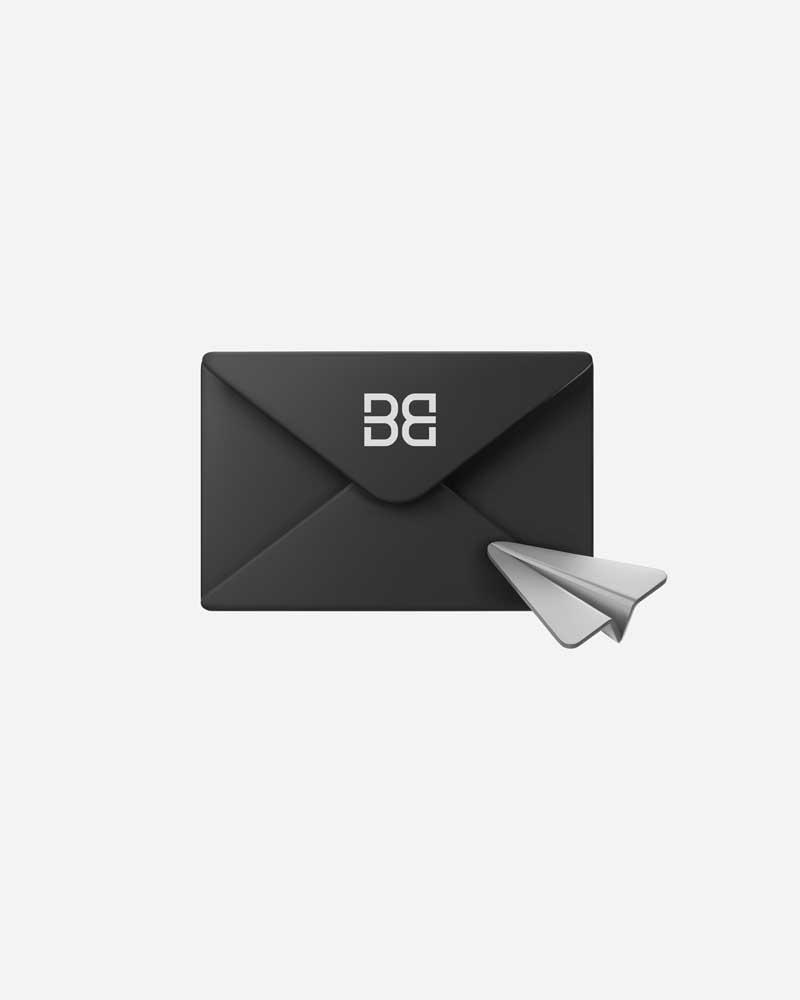 Don't miss anything in the future! Subscribe to our newsletter and be the first to know about upcoming special editions.

Note: The vehicle shown here in pictures and videos is a model identical to the BMW 503 convertible, from whose interior we were allowed to produce the Special Edition Achtzylinder. Unlike the vehicle shown here, however, this car was delivered in the paint color "Papyrusweiß" (papyrus white). Both vehicles were built in 1957.

Stay up to date: News and stories delivered to your inbox

Shipping to the US and Canada is free of charge for orders above $130. For orders below $130, we charge a fixed fee of $9. We also ship free of charge to many destinations in Europe.

More on this: Detailed shipping information

Are you looking for a band for the new Apple Watch Series 7 / 8?

Are you looking for a band for the Apple Watch Series 1 – 6 or SE?

See “Compatibility” below for more details.

Adjusting the size of your metal band

The size of your metal band can be easily adjusted with the help of a screwdriver, which is included in the scope of delivery. If you would like us to preconfigure your watch band for your wrist, you can enter your wrist circumference here.

How to measure your wrist circumference

Links left after resizing will be included in your package.

Note: If your wrist circumference exceeds 200 mm (7.9 in), you will need additional links, which need to be purchased separately.

Replace the pin buckle clasp with a butterfly clasp. Best suited for people with a wrist circumference between 175mm - 195mm. Produced by the German metal manufacturer Craiss.

The color and finish of the folding clasp always matches the case color of your Apple Watch.

Our standard size fits 95% of all customers. If you have a particularly narrow or wide wrist, you can request a custom size.

Please measure your wrist and then enter the circumference in MM or inches.

How to measure your wrist circumference

BandWerk watch straps are perfectly tailored to your individual Apple Watch in terms of shape and color.

Choose here whether you use the classic Apple Watch (Series 1 – 8, SE) or the Apple Watch Ultra, which was released in 2022, to get the mechanically and optically correct adapter components and the right clasp for your Apple Watch.

Thanks to the practical applicator, the BandWerk screen protector can be installed in just a few steps.

Hello, we think you may be browsing from %redirect_store_name%

To checkout in your local currency please confirm your settings below:

Yes, take me to the %redirect_store_name% store

Store Settings Hello, we think you may be browsing from %redirect_store_name%

To checkout in your local currency please confirm your settings below: